August Events at the ANNEX and Gallery B 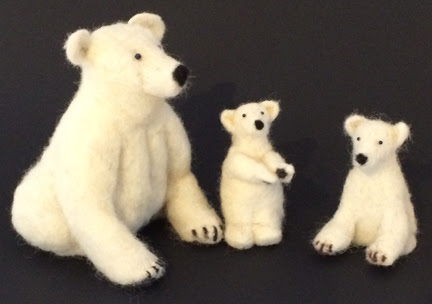 The felted sculptures are primarily of endangered and threatened animals throughout Maine and the world.  Half of the proceeds from sales will go to the World Wildlife Fund and the Climate Change Institute.
@Gallery B, 5 Main Street, Castine

Annex Feature Exhibition:  The work of Thomas Barrett and Leni Mancuso, and their son, Kedron Barrett

These longtime Castine residents were astonishingly gifted, avant-garde, and prolific. It is our honor to show their work at Gallery B and the ANNEX. Tom and Leni met in New York in the 1940s while studying art at the Brooklyn Museum School. They came up in the art world in New York City when it was the nexus of art innovation and they worked side-by-side with many of the well-known artists of the Abstract Expressionism movement. Both of their bodies of work reveal a deep thoughtfulness, a response to the different eras they lived in, and explorations of shifting styles and movements. They started summering in Maine in the 1960s, and much like Marsden Hartley and Fairfield Porter before them, they brought worldly expressive and stylistic innovations to bear on representing the Maine landscape and culture that became its own style. Kedron Barret, their son, was raised immersed in art and became a fabulous painter and print-maker himself. He lives in Berlin, Germany and visits Castine 3 or 4 times a year. Please join us to hear him talk about the lives and work of his parents, Leni and Tom and his own work.

Maine Gallery + Studio Guide is in its 19th year of promoting Maine art to the world. This award-winning guide presents 172 pages of beautiful fine Maine art, easy-to-use contact info and maps. Visit the digital edition right here, right now. Don’t be afraid to use the live links on each page!