Matt Blackwell and Kathi Smith
May 3 – 27
Opening reception Thursday, May 3th from 5 – 7pm 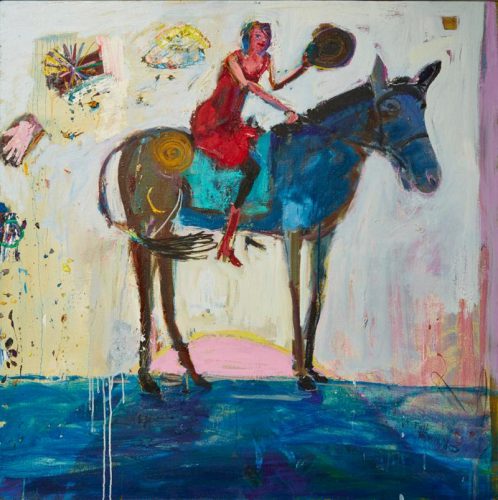 Matt Blackwell’s vibrant mixed media paintings burst with color, texture, and reverberations of the improvisatory bang of their creation. Blackwell is a fearless and prolific artist. His work, which is narrative and rooted in Americana, is wicked quirky, and floridly imaginative. In it, we see the artist’s flair for the uncanny, an irreverent wit, and a keen appreciation for the myriad absurdities of being, but Blackwell’s empathy for his often eccentric protagonists is always apparent. Though some pieces are inspired by the music of singer/songwriters like Bob Dylan, John Prine, and Lucinda Williams, or by scenes from everyday reality, in Blackwell’s America, delirious and carnivalesque inversions of order occur on the regular. Bears stand upright and escort glamorous women to undisclosed locations, gleefully maniacal, Day-of-the-Dead-looking characters speed their pink cartoon of a car around the feet of a great colossus of a moose (whose antlers seem light and airy, like fairy wings), as it stands motionless amid a crowd of random and assorted human and supernatural beings gathered in a forest clearing. As critic David Brody puts it, “Blackwell’s figures are both fantastic projections of psychic roles and notes on everyday weirdness. . . [his] fondness for the Twilight Zone is in cahoots with the ambiguity of his narratives.” Place is important, with most of Blackwell’s imagery drawn from places that meaningfully intersect with his own biography: Maine, upstate New York, and New Mexico. Artists Fintan Boyle and Jennie Nichols describe Blackwell as “something of a regionalist chronicler. As such, the paintings are a form of notation or witnessing. But if the footing is in regionalism there is also a Hogarthian cocked eye on the lookout for the right scene that will give us regionalism’s crusty experience as a cautionary lesson for the wider world.”

Blackwell on his process: “My work is a combination of observation, memory, and painterly process. Although narrative, the work is quite often propelled forward by formal and painterly concerns, abstraction. I often use groups of figures to convey my narratives. However, they exist as a reason to push paint around. Sometimes I have a clear agenda on my narratives, other times it comes about through painterly process. Sometimes the narrative is clear, other times its ambiguous and left to the viewer to draw their own conclusion.”

Matt Blackwell holds a BFA from Portland School of Art (now Maine College of Art)(1977) and an MFA from University of North Carolina (1988), where he received the Holderness Fellowship for Excellence. In 1980, he was the recipient of the Marguerite Zorach scholarship in painting to the Skowhegan School of Painting and Sculpture, and in 2015 he received a Guggenheim Fellowship. His work is in the permanent collections of the Portland Museum of Art (see the aforementioned Moose there), the Everson Museum of Art (Syracuse, NY), and the Savannah College of Art and Design (Savannah, GA), as well as many private collections. 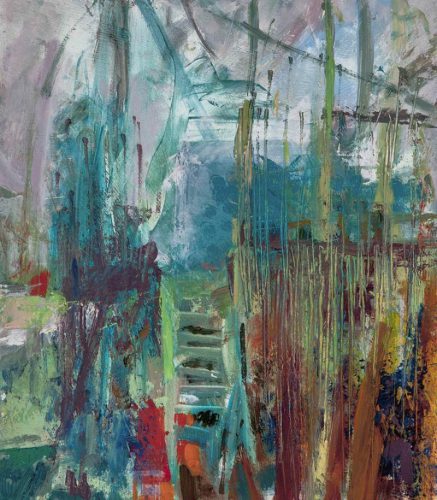 Kathi Smith’s lush, expressionistic paintings are known for their loose, confident brush strokes, and their complex and sophisticated interplay of textures, gestural marks, and rich, abundant color. As art writer Marcia Santore notes: “Her surfaces are worked and reworked, brushed, rubbed, dabbed, scuffed and pressed, built up in layers, scraped down again, scratched through, into a surface defined by texture and traveling marks, touched by brilliant color.” Thematically, location holds a place of primacy. Smith is most inspired by scenes in which she finds herself lost in the act of looking: “Complicated spaces with an abundance of information intrigue me, and I consider it my task as an artist to find order within them.” Though her work is representational, she is always, in her words, “flirting with abstraction. . .There’s a balance between the literal and the conceptual. For me, painting is about seeing, experiencing, and articulating the world (things, spaces, places) around me. . .using observation, perspective, point of view and perception to translate the world I find myself in.”

Kathi is currently interested in “the role of the landscape in developing any one person’s sense of self, and, when conjured through sensations, such as color, light and touch, how powerful the visual memory of a place can be.” Introducing an implied “self” with a sense of identity in relation to a particular landscape necessarily inscribes it with a narrative quality. As Kathi says, “I look for narratives within the landscape. I find them in backyards, abandoned spaces and in those spaces in between that are often overlooked.”

Most of Smith’s paintings are started on location from direct observation, but are then brought to her studio, where she continues working on them. “Through this process, the paintings become a blend of both real and remembered worlds, more evocative of the subject matter than descriptive.” Kathi’s recent paintings are visually compelling landscapes relevant to her personal history, emotionally inscribed with sense memories of her family’s homestead in Nova Scotia, her hometown in western Maine, and Maine’s Great Cranberry Island. As such, their narrative holds an intimate, first person point of view: “I find familiarities in these places, where a particular light, color, or texture in the landscape will evoke a memory, then becoming my subject.”

Kathi Smith holds a BFA in Painting & Drawing from the University of Southern Maine (2003), and a MFA in Painting from the University of New Hampshire (2008). She has participated in many regional and national exhibitions, and numerous prestigious residencies. She received a full fellowship supported by the Joan Mitchell Foundation to the Vermont Studio Center and has been a Fellow and Artist-in-Residence at the Virginia Center for the Creative Arts, Weir Farm National Historic Site in Connecticut, and the Heliker-LaHotan Foundation in Maine. She currently teaches studio arts at Husson University in Bangor.