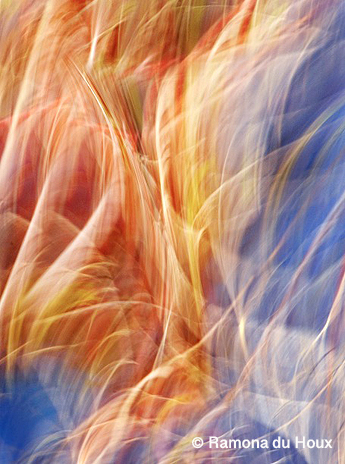 Starting on November 8th the SugarWood Gallery, of Farmington, will feature new fine art photography of Ramona du Houx. The open house will be held on Nov 16th at 4-7 pm.

Ramona du Houx creates fine art photography that looks like watercolor paintings evoking a sense of wonder. Many have found they relieve stress, as they are relaxing, thought proving and mystical. Her new work will include images of landscapes of Maine’s Western Mountains, fields and flowers created with her technique she first discovered in 1979.

“I’m excited and honored to be showing my work at SugarWood. Many of the new pieces depict the magnificent lands surrounding Farmington,” said Ramona, of Solon. “I try to bring the beauty, magic and mystery of nature to viewers by amplifying nature’s essence. I translate what I feel when I’m outside, merged within nature’s embrace, through my art work, thereby bringing the energy and peace of the natural world into the lives of folks who view my images.”

She uses the camera with a painter’s eye. Her technique uses movement to create a sense of wonder through colors, textures, memories, energy and the seasons. Everything within the viewfinder becomes visibly interconnected when objects merge with the motion of the camera as the image, the “lightgraph,” is taken.

“Many Native American’s believed that everything is interconnected. I try and depict the energy and emotion that makes those connections tangible. But the technique can be challenging, as I never know exactly what the results will be,” said Ramona.

“Scientists, innovators, and inventors throughout history took the time to observe the connective rhythms in nature. Ben Franklin’s electrical experiment depended upon his observation of those connections. Aerodynamic technologies that make cars, planes and athletes faster have relied upon recording those rhymes. But the innovators of tomorrow may be in jeopardy for now society plugs us into the Internet, and while that can open doors, sometimes too much of being Internet-connected disconnects us from the mysteries of the natural world — that can be transformational.”

By the time Ramona was 12 she couldn’t be seen without a camera. By 18 she was teaching photography and industrial design at Collegio San Antonio Abad in Puerto Rico.

During college she worked with three New York City photographers. In 1979 she landed jobs to take political photographs of Sen. Ted Kennedy, and President Jimmy Carter. The same year she discovered her “lightgraph” technique and held her first exhibit in Huntington, Long Island. Excited by the new way of expressing herself she took her “lightgraph” images to the Museum of Modern Art, where they were put on file.

The Zen nature of her work became obvious to Ramona so she continued her studies in art, and philosophy in Kyoto, Japan while teaching. Her travels in the East led to numerous exhibits in Japan and lifelong connections.

In England and Ireland, she explored the mythology of the region, while raising three children, ghost writing a novel, and forever taking photographs. After returning stateside to Maine, she started a publishing company, Polar Bear & Company, with her husband and was hired as a consultant by a local artist. During this time she also explored more about the mysteries of motion in her lightgraph technique, worked for newspapers and wrote a children’s novel. By 1998 she was given access to a color darkroom at the Lewiston Creative Photographic Art Center to print a backlog of work in exchange for advising the Center’s photography students.

In 2005 Ramona started a newsmagazine, Maine Insights, which continues to this day. She worked as a photographer for the 2008 DNC convention in Denver, Colorado, and photographed President Barack Obama’s second Inauguration in 2012.

For the past three years she’s been consulting, writing, exhibiting, organizing and always taking photographs. Recently she organized the Elected Officials to Protect America’s Lands, a group comprised of veterans who are also lawmakers, to send a letter to Sec. Zinke requesting he support the Land and Water Conservation Fund. The LWCF supports millions of dollars of projects, in every county in Maine and in every state, for the upkeep of our parks. As the organizer/photographer she traveled with the EOPA delegation to Washington, D.C. where they made their case to seven US Senators.

“The Senators and their staff were incredibly supportive of our mission, wanting to protect our public lands,” said Ramona. “I see my political work as an extension of my art work. I’m passionate about protecting our public lands, without them we loose sight of who we are as a people.”