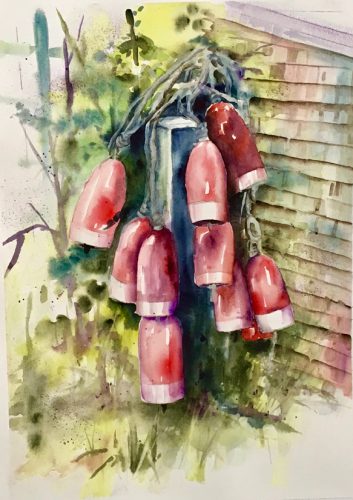 The watercolors of New Harbor artist Peggy Farrell are now on display in the Hall Gallery at Miles Hospital in Damariscotta through January 1, 2020.

Peggy Farrell is living proof that childhood dreams can come true.  From earliest childhood in Pennsylvania she has been drawn to artistic pursuits, from crayons and pencils to oils.  She wanted art lessons and an art education, but practicality and life intervened.  It was not until moving to the rocky shores of New Harbor, Maine in 2001 that she took out brush and paper and began once again to paint and fulfill her dream of becoming an artist.

Farrell is largely self-taught and developed her talent attending local workshops and community education programs in Pennsylvania, New Jersey, Massachusetts, and Maine.  Art has always been a pursued interest and has included exploring mediums such as stained glass and calligraphy. She has painted in oils and spent a number of years studying decorative and tole painting techniques.  But it is watercolor that has evolved as her favorite and most natural medium. Initially influenced by the eminent American watercolorists, Winslow Homer and Andrew Wyeth, she continues to work on mastering the medium.

Maine is Peggy Farrell’s primary source of inspiration.  Living full time on the Pemaquid peninsula, she appreciates the diversity and beauty of each season and has titled her exhibit, “The Seasons of Pemaquid”.  Her realistic and intensely hued paintings reflect an appreciation for the landscape and its distinctive architecture.  She is frequently moved to paint old barns, sheds and rural homes, as well as harbor and waterfront scenes and local wild life.  She often sketches and photographs the local Maine scenery before returning to her Potting Shed Studio where she takes out brush and paint to render what she has observed.

Farrell is an active member of the Pemaquid Art Gallery at Pemaquid Point where she has served as Gallery Manager for the past 5 years and the River Arts and Kefauver Galleries in Damariscotta.   Her work has been featured on many locally sold note and holiday cards.

Paintings may be purchased directly from the artist during the exhibition.  A portion of the proceeds from sales of art will be retained by the Miles Art Committee, one of the branches of the Miles Hospital League which, ensures the  acquisition and placement of original art on hospital walls.