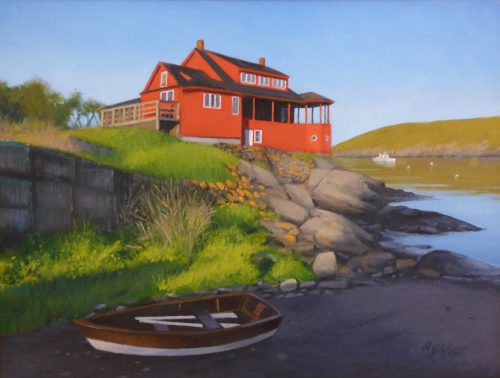 “The Red House and Skiff,” by Kevin Beers.

“Kevin Beers: Points of Light” is an exhibit of new paintings of Maine and Cuba, including Beers’ signature portraits of old cars and trucks. It will be exhibited at Gleason Fine Art, 31 Townsend Ave., Boothbay Harbor, through July 21.

Beers has been with the gallery for more than 20 years and continues to be one of the gallery’s most popular and recognizable artists.

Four years ago, Beers and his wife, Amy, decided to sell their New York City home and move to midcoast Maine. Home is now a spacious, 19th-century sea captain’s house in Thomaston, from which Beers ranges up and down Maine’s coast and islands, painting as he goes.

When it comes to describing his work, “I don’t believe in long-winded manifestos,” Beers says. “The paintings can speak for themselves more honestly than I ever could. I will say that I only paint things for which I have a strong emotional attraction.”

Beers grew up in the Hudson Valley, an area with a rich history of landscape paintings. He is drawn to plein air. He expanded his reach to later include Monhegan Island and Maine’s midcoast, where artists like Edward Hopper, Robert Henri, Rockwell Kent and the Wyeths have all painted.

He’s also held a longtime fascination with old cars and trucks. “I am drawn to the anthropomorphic qualities I find in these faded cast-offs,” he says. That fascination led him to Cuba twice, most recently last winter, when he joined a painters’ group. In Cuba, Beers discovered a multitude of ’52 Chevys, all in good working order. He painted the brilliantly colored red, green and turquoise Chevys against the backdrop of Havana’s beautiful but crumbling baroque buildings and lush vegetation.

Gleason Fine Art is not holding receptions at this time, but the gallery is open and showing new exhibitions while following precautions due to COVID-19. Hours are 10 a.m. to 4 p.m. Tuesday through Saturday. Contact the gallery at 207-633-6849 or info@gleasonfineart.com for additional information, or visit www.gleasonfineart.com.