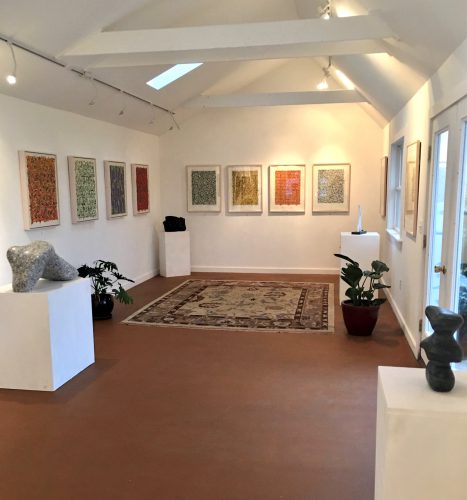 Marc Leavitt’s “Garden Series” exemplifies his approach to creating art. Color represents an overriding concern — with particular excitement occurring when color relationships offer problems that require continual exploration, layering and refinement. Building up surfaces, including using predetermined colors that seem “wrong” in relation to other colors and forms in a painting, he spends weeks in the studio to pursue making artworks “right” as objects of aesthetic beauty.

Leavitt’s paintings and works on paper have been placed in U.S. and international collections and featured in Architectural Digest, Boston Common, The Boston Globe, and other publications. Selected juried exhibitions include several at the Cambridge Art Association (with Director’s Choice, Honorable Mention and National Prize Show recognitions), the I-95 Triennial — From Connecticut to Maine at the University of Maine Museum of Art, and CMCA’s Work to Collect Now.

The Maine landscape has had a major influence on Joan Freiman’s work, as it is here in Maine that she began to paint her surroundings and to develop her language, enabling her to communicate on paper and canvas what she sees and feels. Though she uses the landscape as her source, Freiman transcends the literal interpretation and engages the viewer in seeing something they may see daily in a different way. She considers her landscapes stages upon which she interprets form, color and movement. “I paint because it provides me great pleasure and it connects me with the natural world,” she says.

Freiman’s work is included in many public and private collections, and her work has been included in several prestigious juried shows three decades.

Hugh Lassen’s sculpture can be seen in numerous public and private venues. His six-foot sculpture “Totem” is the centerpiece for the newly-created Warren Memorial Sculpture Garden in Westbrook. Another sculpture, “Crocodile,” carved from soapstone, was selected as one of the nine works of art included in the Warren Garden initiative.

Among his other public pieces are “Elephant,” a 4-ton sculpture made from a glacial erratic, and “Sea Form,” created with slate  from Monson. Both sculptures are sited at the UMaine Buchanan Alumni Building in Orono. Jesup Memorial Library in Bar Harbor purchased a large sculpture five years ago that graces the grounds of this historic building.

Individuals throughout New England, New York and as far south as Virginia, have added Hugh’s sculpture to their collections.

“I find that my own sculptural aims revolve around mass, bulk, weight, in a phrase, ponderable form,” he says. “For many years, I’ve studied the figure using a range of exercises to develop my sense of touch. From these efforts and from my experiences carving, I realize that, despite being an abstract sculptor, my work is founded on human and animal forms.”