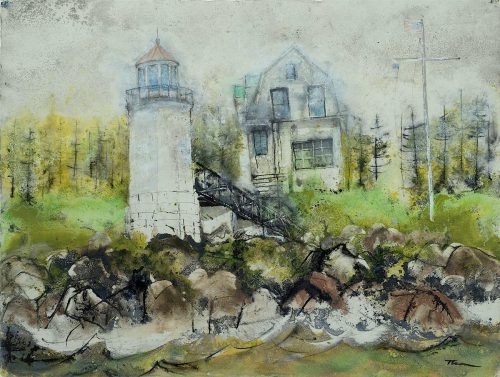 The early fall show at the Blue Hill Bay Gallery features two celebrated American modernists who painted Maine throughout most of the 20th century.

William Thon, NA (1906-2000) was noted for highly abstracted landscape paintings of the Maine coast. He was born in New York City in 1906, and debuted as a professional artist in 1939 at the Corcoran Gallery. After World War II Thon chose to live in the relative isolation of Port Clyde, Maine on a peninsula overlooking the sea. Thon’s Maine was a timeless and vital place reflecting his own passion for its rough, beautiful forests, intemperate seas, and the scatter of wooden buildings along its rugged shoreline. He was awarded innumerable prizes and is represented in over 60 museums including The Metropolitan Museum of Art, The Brooklyn Museum, and in Maine, The Farnsworth Art Museum, The Portland Museum of Art, and The Ogunquit Museum of Art. 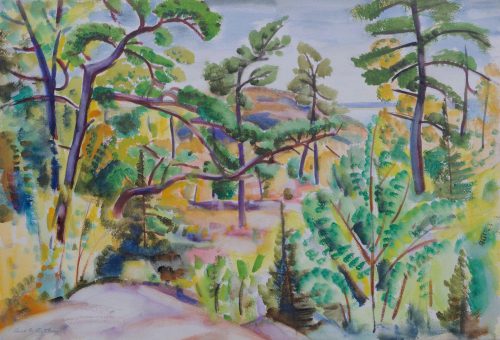 Carl Gordon Cutler, Through the Trees

Carl Gordon Cutler (1873-1945) studied at the School of the Museum of Fine Arts, Boston, and later at the Academie Julian in Paris. Cutler exhibited at the earth-shaking Armory Show introducing Modernism in art to the United States. By the mid-1920s, Cutler was painting watercolors of Deer Isle, Mount Desert, and–for the next thirty summers, Eggemoggin Reach on Blue Hill Peninsula, where he had a cottage. His watercolors, influenced by Fauve color and John Marin’s forms, were exhibited in the Museum of Modern Art, and Whitney Museum of American Art. In 1994, the Vose Gallery, in Boston, put out a color brochure, Carl Gordon Cutler Along the Maine Coast 1873-1945. Also in the 1990s, the Babcock Gallery, in New York City, published Carl Gordon Cutler, American Modernist Rediscovered.
This show may be seen from Sept 20th until Oct 20th at the Blue Hill Bay Gallery on Main St. in Blue Hill, Tues-Sat 10am to 4pm.
FMI: email peter@bluehillbaygallery.com or call 207-374-5773.