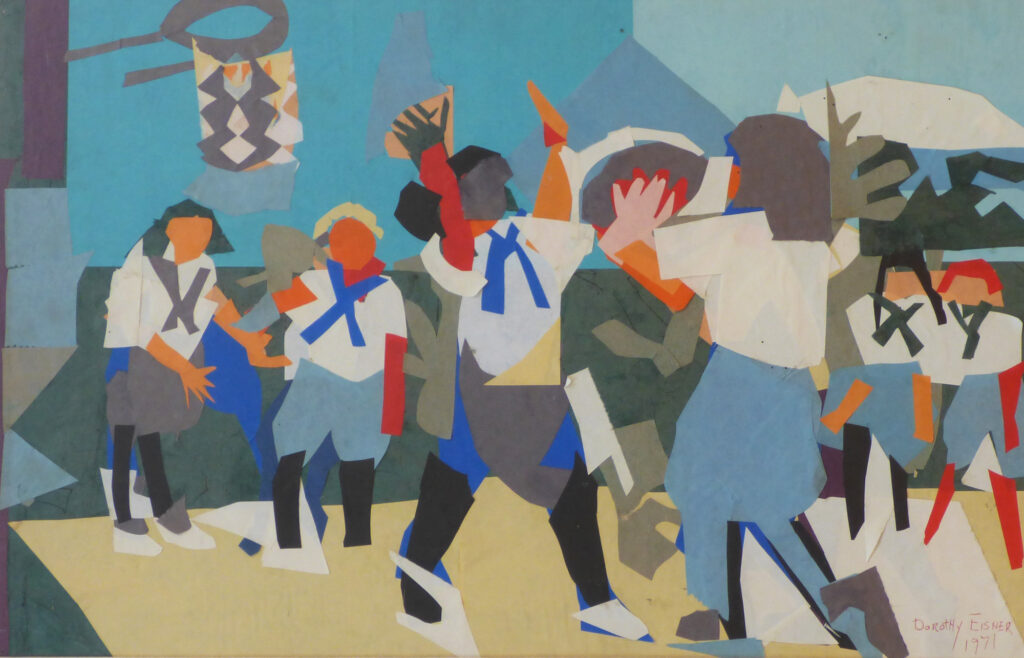 A piece by Dorothy Eisner.

Gleason Fine Art in Boothbay Harbor is showing the paper collages and select oils of Cranberry Island artist Dorothy Eisner (1906-1984) from May 27 to June 29.

For 24 summers at the end of her life, Eisner was an enthusiastic member of Cranberry Island’s large artistic community, which included John Heliker, William Kienbusch, Gretna Campbell, Carl Nelson and many others. Gleason Fine Art is honored to represent the estate of Dorothy Eisner for her daughter, Christie McDonald.

Dorothy Eisner was born in Manhattan in 1906. She entered her teen years just as New York City became fully besotted with what would become known as the Roaring Twenties and the Jazz Age. Businesses were booming; Henry Ford was rolling out cars for eager buyers; women nicknamed “flappers” were free to wear short, flippy dresses. Music, especially all forms of jazz, and dance were enjoyed everywhere. Life was good, and The City was the place to be.

Young Dorothy was already showing the promise that would lead to her life in art. As a child, she won drawing contests. As a high school student, she studied at the prestigious Ethical Culture High School in Manhattan, a school known for its arts instruction. Then at the famous Art Students League, her skills grew under the tutelage of such renowned instructors as Thomas Hart Benton and Kenneth Hayes Miller.

Meanwhile, modernism, an exciting new art form imported from Europe, was challenging artists to step away from realism. Eisner herself was taken by the work of Henri Matisse, one of modernism’s grandmasters. Although it would be years before Eisner incorporated the modernists’ ideas, she still found early success painting in the social realist style. In New York, she exhibited her work broadly, amassing numerous awards. She was often singled out for praise: the New York Post critic called her paintings “thorough and vigorous”; the Times critic remarked on her “free brushwork”; the Post critic called one of her paintings “the outstanding canvas of the show.”

In 1936, after marrying John McDonald, a journalist, Eisner and her new husband began to travel widely — to Mexico, Europe and the American West, where the couple often stayed in Livingston, Montana, known for its fly-fishing. It was in Montana that Eisner first experimented with paper collage, a way of artmaking made famous by Matisse and Picasso.

Few of Eisner’s paper collages have survived, but the ones that do exist show the clear influence of Matisse and the modernists. The collages also serve to indicate the path forward that eventually led Eisner to modernism, a style she explored and made her own during the summers she spent on Great Cranberry Island. For example, in Eisner’s collage “Camp Basketball” and in her oil paintings of the same title, Eisner used bold, solid blocks of color to compose her figures. The results are delightful: darting and jumping groups of uniformed girls in bright, white shirts and navy-blue ties. The girls are having fun, and so is the viewer.

In many of the paintings Eisner made during her Cranberry Island years — such as “Preble Cove,” the croquet series (the family members were fierce croquet competitors), and “Exercise Class” — she used the bold, solid blocks of color that have much in common with her earlier collages, such as “Baseball” and “Snowball.” Eisner’s Cranberry Island creations are emphatically modern.

As with many women painters of her time, after marrying, Eisner set aside her career as an artist. Many of her friends, and even her family, knew little of her artistic endeavors, let alone her acknowledged talent — that is, until she came to Cranberry Island. On Cranberry, she and her art blossomed in the company of fellow artists who encouraged her. The oils she made on Cranberry are bright and bold and considered by many the most successful of her career.

“Dorothy Eisner (1906 -1984): Paper Collages and Select Oils” runs from May 27 through June 29 at Gleason Fine Art, 31 Townsend Ave., Boothbay Harbor. Spring hours at the gallery are 10 a.m. to 4 p.m. Monday through Saturday and other times by appointment. The gallery requests that you mask up if you have not had your vaccinations. Gallery owners (Dennis, Marty and Andrew Gleason) are fully vaccinated. Call the gallery at 207-633-6849 or email info@gleasonfineart.com for further information. Check out the Dorothy Eisner show as well the gallery’s entire inventory of contemporary and estate art at gleasonfineart.com.