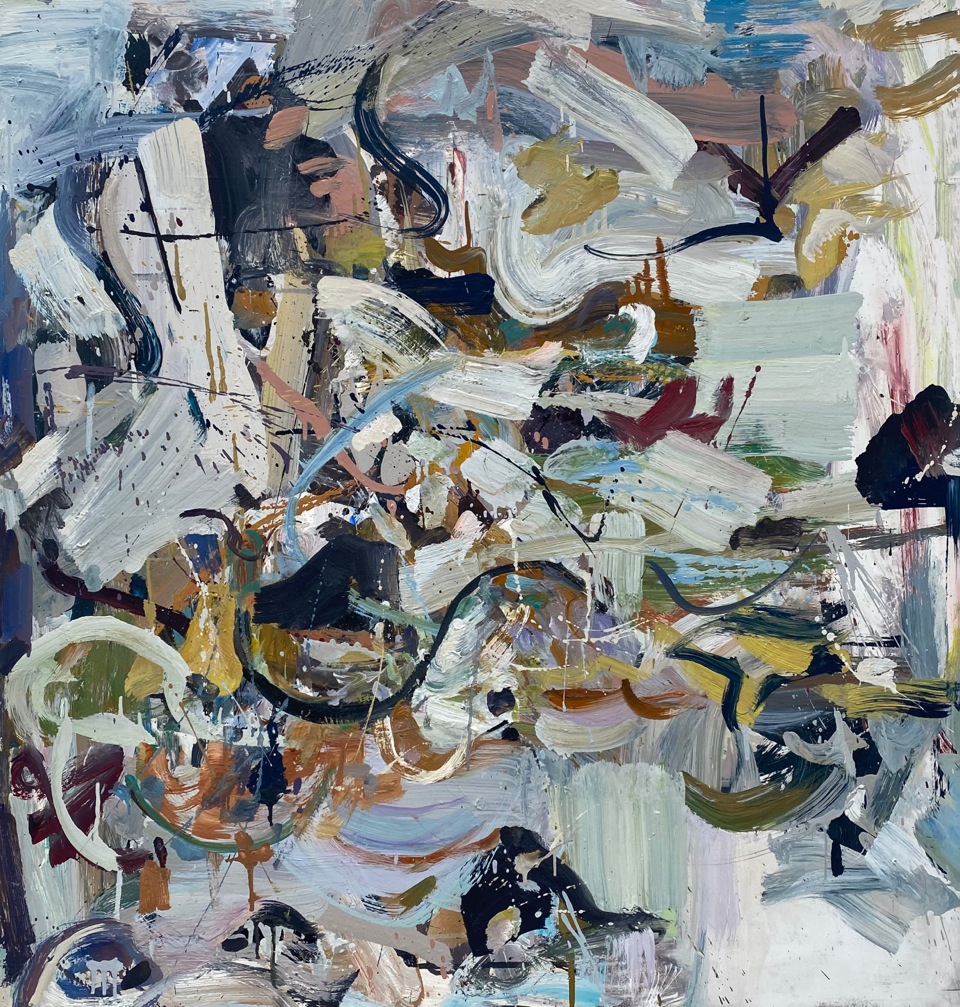 Ellsworth Courthouse Gallery Fine Art will present “Master Effect: Jon Imber and Linda Packard,” an exhibition highlighting the continuum between master painter Jon Imber and one of his students Linda Packard, on view Sept. 15 through Oct. 15 at the gallery and online at www.courthousegallery.com.

In conjunction with the show, the gallery will host a Zoom talk from 5 to 6 p.m. Sept. 29. Jon Imber’s wife, Jill Hoy, will join Linda Packard and gallery director Karin Wilkes on Zoom to talk about the show and how Imber influenced Packard’s work. To register call 207-667-6611, or email info@courthousegallery.com.

“Master Effect” highlights the influence Imber had on Linda Packard, one of the gallery’s long-standing artists. Gallery owners Karin and Michael Wilkes are pleased to announce they will be representing the Jon Imber estate, and they have been working with Jill Hoy, Imber’s wife and his son, Gabe Imber.

The profound works of the masters are part of a continuum that have inspired developing artists for centuries. Imber studied with Philip Guston at Boston University, and he often cited Willem de Kooning as a strong influence. For Packard, influences include Cezanne and Matisse, the New York abstract expressionists, and Jon Imber. Packard had the privilege of working with Imber in Stonington for five years before he died. During this time, Packard worked from life, as did Imber, mostly plein air.

“Imber taught me an entirely new way of looking at nature and the landscape,” Packard says. “Painting from life became about responding to the experience of being at a place rather than recording the subject.” This approach changed Packard’s work forever, and she cites Imber as her most important influence.

Others have noticed the connection between Imber and Packard. In a recent Portland Magazine article (February/March 2021) about artists and their influences and mentors, art critic and historian Daniel Kany paired the late Maine painter Jon Imber (1950–2014) with contemporary painter Linda Packard. The article, “Fuel of Influence,” firmly establishes Packard as one of Imber’s protégés. Although the Imber influence is evident in Packard’s work, the translucent effect she achieves with paint is clearly her own.

“I think our strongest common denomination is that’s it’s all about the paint,” Packard says. “The paint drives the expression. Through Jon, I learned the joy of working with juicy paint, scraping and rubbing out, and welcoming the happy accident that sometimes redirects the work.”

As a result, Packard has since transitioned to a totally process-driven studio practice with a focus on abstraction. “As my work has evolved, subjective or abstracted, it’s the paint and how it can be used that interests me the most,” Packard says. “That’s Imber’s influence.”

Jon Imber (1950-2014) was best known for his plein-air landscape paintings. Although Imber found early success with figurative paintings, he experimented with different influences, styles and subject matter all his life. He transitioned from figures, to portraits, to large studio landscapes, then figures in landscapes and plein air landscapes, and finally landscapes on the edge of abstraction. Throughout these changes Imber maintained a unique style of gestural brush strokes and an intimate sense of knowing his subject that goes beyond observation. The former director of the Danforth Museum called him one of the most important painters of his generation and placed him in the lineage of Boston Expressionists.

Imber’s work has been included in many publications including Paintings of Maine: A New Selection by Carl Little, Boston Modern, Figurative Expressionism As Alternative Modernism by Judith Bookbinder, and 100 Boston Painters by Chawkey Frenn. Imber split his time between Stonington, Maine, and Somerville, Massachusetts, where he taught at Harvard for many years. 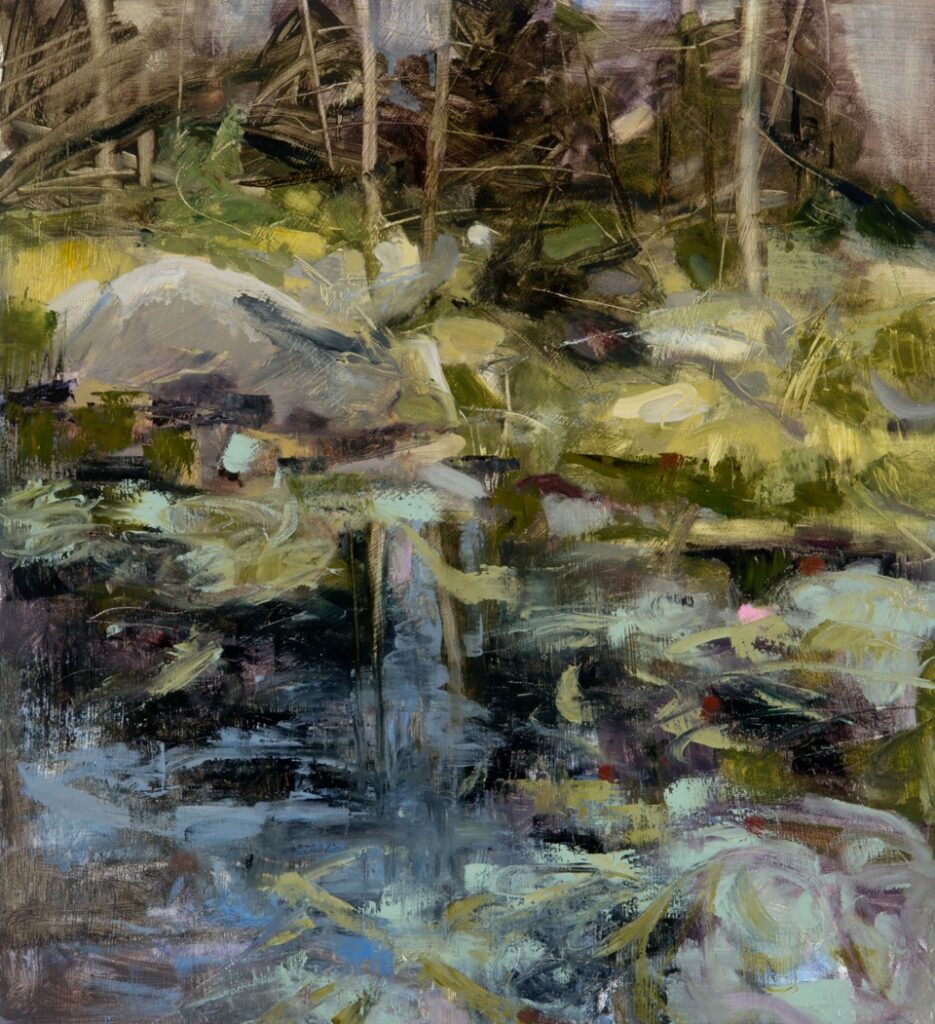 Linda Packard is an abstract painter interested in pushing the physical properties of paint. Although she began her career by painting plein air, Packard’s current work is process driven. She enjoys experimenting with mark-making and textural tools, and exploring the play of opposites: warm/cool, thick/thin, transparent/opaque. While the majority of Packard’s work is now abstract, she still considers herself a landscape painter and often draws on remembered experiences in nature.

Packard holds a BA in studio art from Smith College. Her early work focused on printmaking and extended into book arts. Packard has been awarded several residencies, including the Great Spruce Head Island Art Week (2009), a Heliker-LaHotan Foundation fellowship (2015), and a month-long residency at Weir Farm in Wilton in Connecticut (2017). Packard has lived in Maine for more than thirty-five years, and she currently maintains a studio in downtown Bangor.

Courthouse Gallery is at 6 Court St. in Ellsworth. For more information, call 667-6611, or visit www.courthousegallery.com.